It’s time for a Musical!

Posted on July 1, 2015 by cleoharrisseaton

It’s the end of the summer term and therefore time for Guildhall’s Musical! This year we are showcasing Guy’s and Dolls and here in Design Realisation we have had the exciting challenge of bringing Adam Wiltshire’s designs to life in our Silk Street theatre.

The set was designed as a forced perspective, industrial and illuminated mix of New York imagery and has required a tremendous team effort to pull off but our students (led by Giulia, Liam, Claire, Jess, Jasmine and Kim,) as always, have done a great job!

These are some examples of the model box from which our students created the set. 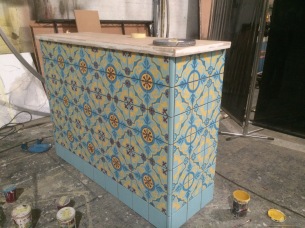 One of the first pieces made was the Havana bar which was constructed out of MDF. The tile squares were then routed out and the top was filled and sanded smooth. Once the piece was handed over to scenic art, the body of the piece was painted with three layers of stencilling to build up the pattern. The top of the bar was to be painted with a marbled effect. Our students did several samples and our designer chose his favourite to be transferred onto the set piece and the whole thing was finished off with a glaze. 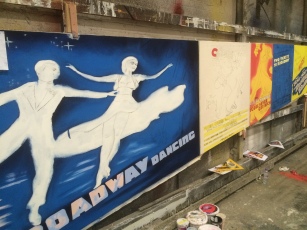 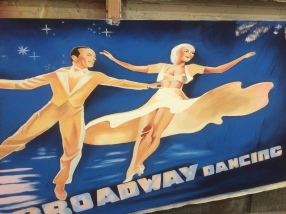 There has been a mass of signs and posters to create for the set and the construction was a combined effort across all three pathways. The largest of the bunch was a ray of film posters. The posters were traced onto the canvas which was then all hand painted in scenic art. 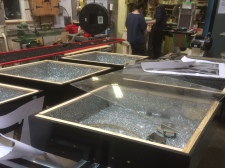 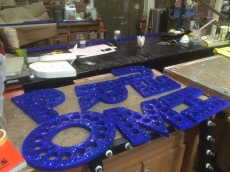 …and the signs kept on coming. 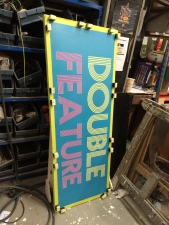 As part of the set we had an array of truss pieces to make in a variety of sizes to complement the forced perspective nature of the scenery.

The larger of the collection were made using timber and had MDF rivets placed on the frames for decoration. The smaller of the set were made from MDF and we used upholstery pins as rivets. 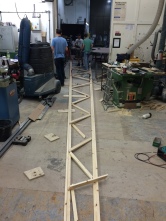 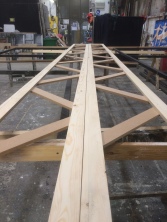 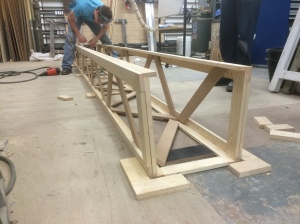 Once completed in construction they were handed to scenic art for texturing (with some good old idenden,) painting and glazing. 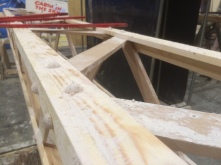 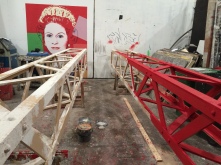 One of the biggest challenges for this set were the construction of the sewer flats.  Due to time restrictions and workshop space,the large steel curves needed to make it were sent out to be rolled and then welded together in the workshop by our students in construction. The steel frames were then clad with plywood and prepared for painting. 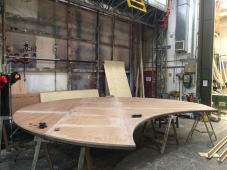 Alena is clearly very excited about something…or she could just be high on filler fumes?! 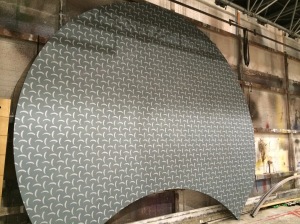 The flat was given a metallic grey/blue base and a stencil was applied to create this effect.

The other sewer pieces were given the same treatment. 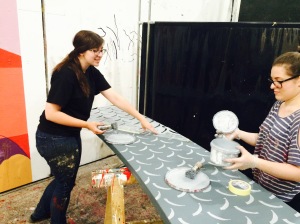 Another large job for scenic art was the painting of the Havana postcard. The students used a mixture of watered down paints and dyes to recreate the painting given by the designer. It was important that the paint was very watery especially in the windows of the buildings as the postcard has to read as a day and night-time image, revealed with backlighting. In order to complete the night time effect the buildings were blacked out on the reverse of the canvas leaving the light to shine only through the windows. 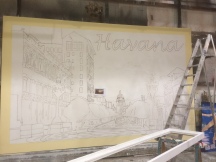 The final large piece constructed for the set was the suspended fire escape. We had the rails sent out and laser cut and the rest of the structure was a construction workshop job. It was then textured in a very similar way to the truss using idenden and painted. 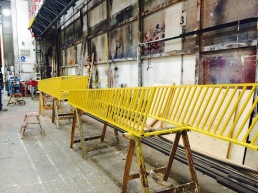 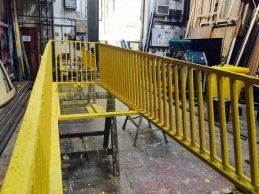 The work continues in DR and believe it or not the pieces in this post are just a handful of the masses of scenery our students have been working. Hopefully it has sparked your interest enough to come and see the show!

If you or anyone you know has an interest in learning and trying out some of the effects and techniques that are used in scenic art to transform our sets, we are running a summer school which is open to all aged above 17 . It runs from Monday 3rd  to Friday 7th August.  Please click HERE for more information.

We would love to see you there!

at Guildhall School of Music & Drama